Alaska Sockeye One of the Most Environmentally Friendly Forms of Food

June 06th, 2022 - Alaska Sockeye is one of the most environmentally friendly forms of food that we know - this is according to Ray Hilborn (a fisheries scientist and professor at the University of Washington's School of Aquatic and Fishery Sciences). 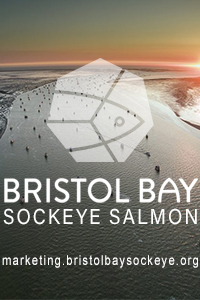 In this episode we show how Ray reaches this conclusion, but first, we provide as much insight as possible (at this point in time) on the upcoming Salmon market.

It's still too early to get a good sense of pricing on the upcoming Salmon season as Alaska's harvest typically doesn't start ramping up until the end of June.

However, it is safe to say that this year will be a year like no other as Alaska is forecasting for 73 million LESS fish than was harvested in 2021, and war-sanctions on Russia could potentially prohibit 315,000 metric tonnes (or almost 700 million pounds) of Russian origin Salmon from entering North America.

Reflecting back on 2021, it was a year that Salmon in the wholesale market was always short, and demand at the consumer level was extremely high as seafood sales reached new highs.

Now with consumers battling inflation, providing value through quality could be the key to a winning formula this year as consumers will want their dollar to go as far as possible.

Just as we advised a few weeks ago, do your due diligence on quality this year - for example rumor has it that there is an oversupply of last year's Sockeye fillets that may get dumped into the market soon.

Our recommendation this week is to start talking to your Tradex Rep on the species, size, and specs on the Salmon you want this year.

Also, if you are interested in some sales and marketing support on bringing more value to your products, give our team a shout.

"and just to wind-up and compare a Sockeye Sandwich from a fast food processor to what is being touted as the most environmentally friendly form of food that is the impossible whopper that is a vegetarian imitation of a hamburger - we're way under that, and now there's a big push for all these artificial fish being produced from plant products - they're never going to come close to the real thing. This study provides an opportunity for BBRSDA and the Alaska Salmon industry as a whole to really advertise their products as one of the most environmentally friendly forms of food that we know."

The main purpose of this study was to compare greenhouse gas and other impacts of Farmed Salmon from Norway to Alaskan Sockeye and Pink Salmon.

Some of the results from the study showed that Alaska Salmon had a much lower environmental footprint compared to Norwegian Farmed Salmon when measured in kilograms of carbon dioxide produced per kilogram of product from the start of the production process to the transport of goods to the final buyer.

Other environmental impacts that were touched upon included nutrient release, ecotoxicity, and land use.

And of these elements, in the case of farmed fish, it is actually the growing of crops for feed that has the most impact from fertilizers, pesticides, and extensive land use.