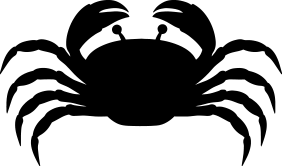 King Crab has a rich and sweet flavour. The body meat has a flakey texture - while the leg meat is somewhat stringy. When cooked - the shell of the Blue King Crab turns bright orange.

There are around 40 species of King Crab distributed around the world. Of these - three species are caught commercially in Alaska - including the Golden King Crab, Blue King Crab and Red King Crab. Unlike other Crab species - King Crab have only 3 pairs of legs and each claw is specialized - they have a small “feeder” claw for handling food - and a larger “killer” claw for crushing prey. Blue King Crab have a brownish coloured shell that is streaked with blue highlights and enormously large claws. Despite these characteristics - they are often mistaken - or mislabeled - as Red King Crab in the marketplace.

Seafood Watch
Ocean Wise
Fishy Fact: Alaska King Crab fishing is considered to be one of the most dangerous jobs in North America. Every year, hundreds of fishermen endure extreme weather conditions and harsh work environments with hopes of catching this desirable seafood.