Atlantic Salmon flesh has a moderate to high oil content - ranges in colour from pale to bright orange and offers a mild flavour.

Wild Atlantic Salmon stocks were at one time abundant. In North America - they range from New England to Ungava Bay in Northern Quebec. In Europe - they range from Portugal to the White Sea in Northern Russia. Today, wild stocks are considered over fished and commercial fishing is prohibited. Atlantic Salmon are the most important farmed Salmon species and most sold in North America come from aquaculture. 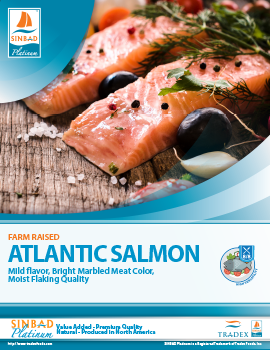