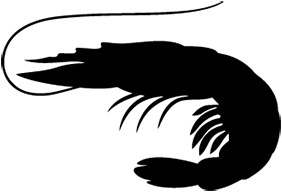 Black Tiger Shrimp have a firm texture and a clean - somewhat sweet flavour. Those raised in farms - with lower salinity in the water - tend to be a bit milder than ocean-caught Shrimp. When cooked, meat turns white and their black stripes turn bright red.

Black Tiger Shrimp - sometimes referred to as “tigers” - can be easily distinguished by their black stripes that encircle the shell. The Shrimp’s head contains all vital organs - including the antennae. Along the abdomen - or tail - is the intestine and ten periopods – or walking legs - and ten pleopods – or swimming legs. These allow the Shrimp to walk along the seafloor or to swim forwards and backwards. Maximum size depends on sex. Females are slightly larger than males and can grow to be 13 inches long.

Black Tiger Shrimp are a crustacean species found on muddy or sandy bottoms at depths of 65 -170 feet. This species is native to tropical waters - ranging from the east coast of Africa to Southern Australia and north to the Sea of Japan. Invasive populations are also present in Hawaii and in the Southern Atlantic Ocean. Despite their broad wild distribution - Black Tiger Shrimp are one of the most popular farmed Shrimp species. About 80% of Black Tiger Shrimp on the market is farmed - predominantly in Asian countries.

Shrimp are highly resilient to overfishing because they have a short lifespan, are fast growers and produce many young. Farmed Black Tiger Shrimp have been ranked on the “avoid” list by environmental organizations. This ranking is due to pollution including - nutrient effluent discharge, use of banned antibiotics and habitat degradation. In addition - depending on the country - management practices are sometimes non-existent or poorly enforced.