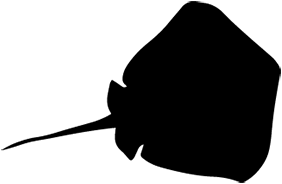 When raw - Skate flesh is pinkish to light tan. When cooked - flesh becomes an off-white colour. The flesh is firm and flakey – flavour is moderately pronounced and adapts well to spice and marinades. Skin is inedible and is generally removed before sale.

In North America - all members of the Rajidae family are referred to as “Skate”. Elsewhere - “Skate” refers to larger species with longer snouts - and “Ray” refers to smaller species with rounder snouts. Regardless their geographic name - these bottom-dwelling species are brownish-grey and have an unusual kite-shaped body. Their pectoral fins are much larger than those of other fish and are attached the entire length of the body – from head to posterior. Skate have organs that are weakly electric. Scientists believe different species emit different amounts of electricity and that this is how Skate recognize one another. Different species of Skate vary greatly in size. The largest species - Raja binoculata - can grow to be 8 feet long. The smallest species - Raja erinacea - is the most common and grows to be just 20 inches long - weighing less than 1 pound.

Due to slow growth and long life - Skate are highly vulnerable to overfishing. Populations in the Northeastern United States have been overfished and are in decline. The most common method of catch - trawling - has considerable bycatch and habitat degradation concerns. Consequently, Skate caught in the US Atlantic and Canadian Pacific are listed on the “avoid” list by many reputable environmental organizations.