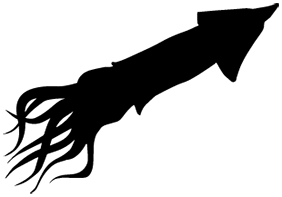 Squid offer a mild and somewhat sweet flavour. The meat is tender and succulent. Frozen tubes should be ivory-white in colour and have no distinct odor.

Loligo is the generic name for several sub-species - the most abundant are referred to as California Market Squid (Loligo opalescens). There are also Atlantic Loligo species - though few in comparison to the Pacific species. Like all other cephalopod mollusks - Squid have a distinct head, bilateral symmetry, a mantle, and arms. The Squid’s body consists of eight arms and two tentacles. The long tubular shaped body is the mantle. The Squids’ mouth is nestled in between the arms. Squid range in length from one inch to six feet.

There are over 300 species of Squid that can be found in both the Atlantic and Pacific Oceans – geographic range varies for each species. Loligo species are most commonly found in the Pacific Ocean - ranging from Baja, California to Southeastern Alaska. The most abundant populations are between Baja and Monterey Bay, California - these populations are referred to as California Market Squid (Loligo opalescens).

Squid fisheries are at the risk of collapse. While some regions have implemented fishing regulations, these have not been proven to be entirely reliable and unregulated fishing still occurs.

Seafood Watch
Ocean Wise
Fishy Fact: Squid propel themselves tail-first through the water by pumping water through valves located near their head.