They look similar but are very different in size, flavour and price.

North Pacific Albacore has higher oil content and a superior flavor profile over it's counterpart.

Many vendors trying to make a quick buck off uneducated customers are selling this product as Albacore Tuna Product of Canada or USA.

Importers of this product are cutting these loins down to a pound then boxing them up as 1-2lb loins product of Canada or USA.

To find out more about what is happening at the end user level we speak to a Sushi Chef who requested to remain anonymous on this matter.

--- Current pricing for North Pacific Albacore can be seen around $8.00/lb USD for loins.

South Pacific Albacore are being offered out at around $3.50/lb USD for 5/8LB loins.

The North Pacific Fishery takes place from June through October and starts as soon as the Tuna are seen in Oregon, then follow their migration route up to British Columbia, Canada.

At the time of this report we are told that the waters temperatures are still faily cold and that the fish are not there yet. 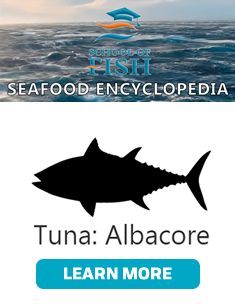 The USA/Canada fisheries do not operate under a TAC but are MSC Certified and are a very well managed fishery.

We reached out to NOAA Fisheries on their outlook for the season and they can be quoted saying.

"Last year had a preponderance of small fish which influence the early termination of the fishery. It is hoped that those small fish will return this year at a marketable size."

In Canada, we connected with Lorne Clayton Executive Director of CANADIAN HIGHLY MIGRATORY SPECIES FOUNDATION and based on preliminary predictions they are hopeful to see Canadian landings increase again this year back to historical norms of 4000 to 5000 metric tons after an extremely low 2017 season.

Our recommendation if you want to ensure you are getting North Pacific Albacore Tuna is to ask your supplier to confirm the Catch Area.

--- And finally, our TradexLIVE offer of the week is for West Coast Caught Albacore Tuna Loins.