February 17th, 2020 --- In this week's episode we report on all Westcoast Dungeness Crab from Alaska to California uncovering last season catch totals, new season projections and the real effects of ocean acidification on Dungeness Crab.

If you ask any Crab fishermen along the Westcoast how the fishing is this year, the common theme would be opening delays and rough weather conditions. 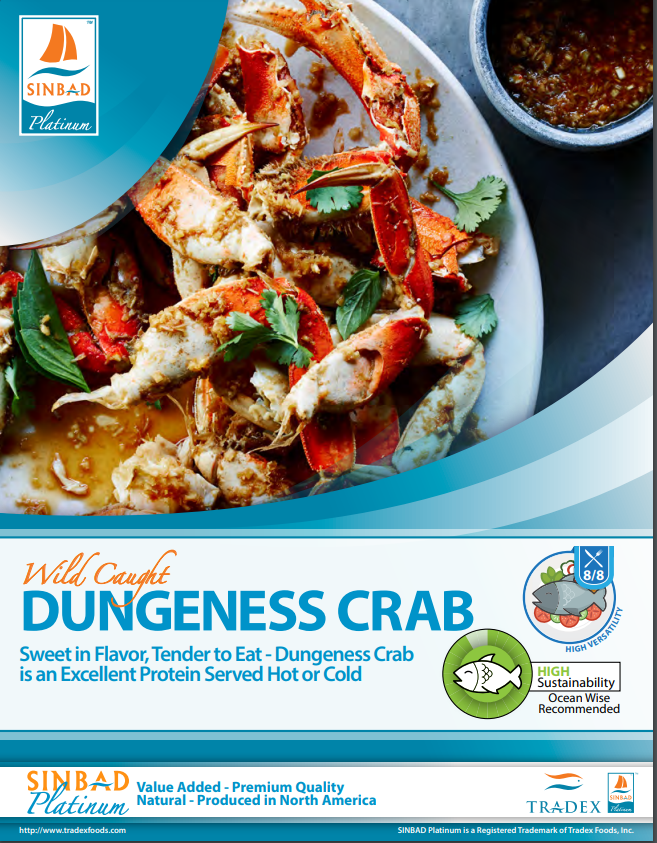 For British Columbia Canada, due to a one-year lag in Fisheries & Oceans Canada collecting data, and with the fishery managed on an April to March fiscal year, even 2019 preliminary data is not yet available to us however in 2018 B.C. fishermen brought in over 12.4 million lbs of Westcoast Dungeness Crab.

Since the start of the year, average pricing for Dungeness ranged from $6.95/lb USD for the smaller 1.5-2lb sizing to $9.85/lb USD for Ocean Run size Clusters FOB Westcoast.

However, prices look to be sharpening up on strong demand as current offers on TradexLIVE for Whole Cooked, Brine Frozen Dungeness Crab can be seen at $7.35/lb USD for 1.5-2lb and $8.20/lb USD for 2-2.5lb FOB Westport, WA.

Our recommendation is to secure your Whole Cooked Dungeness Crab needs now before inventories start to tighten.

--- For Oregon and California, up to 85 percent of the season's catch is typically brought in during the first 8 weeks.

In speaking with Tim Novotny at the Oregon Dungeness Crab Commission he mentions that due to the cyclical nature of this fishery we have been due for a low-end year where they are forecasting for another couple million lbs for the season.

Scientist we spoke with at the California Department of Fish and Wildlife advise that current season totals for California probably actually reflect at least 50 percent of the season totals. 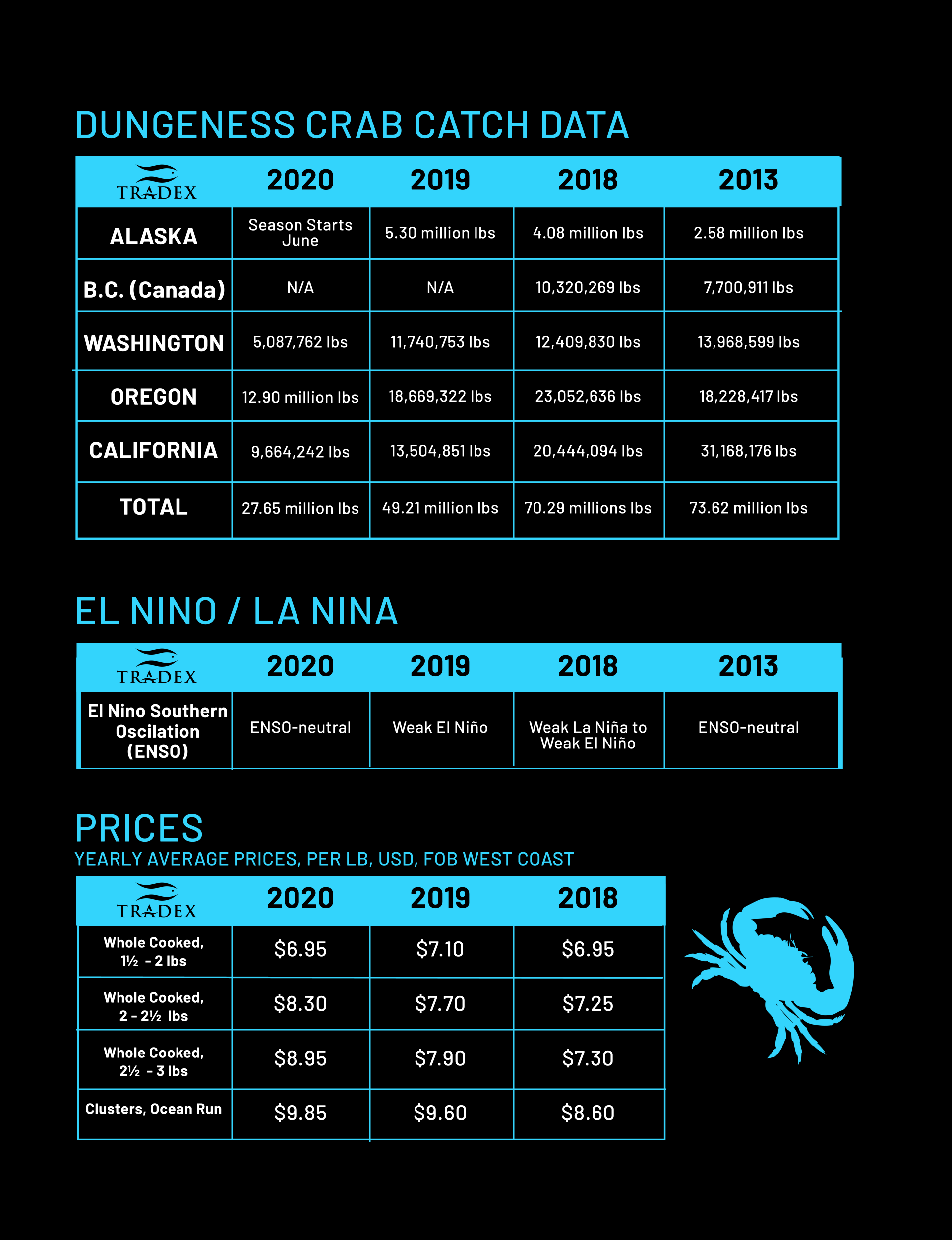 --- Moving back up to Alaska, the 2019 Dungeness Crab season has just come to an end where it ranked as the most valuable on record bringing in $16.3 million at the docks and the third largest harvest on record at 5.3 million pounds harvested, 30 percent more than the 4.08 million pounds in 2018.

Alaska's 2020 season will start back up with it's summer fishery in June.

Just for comparison, let's put these catch totals up against El Nino, La Nina years, and Neutral years where the NOAA Climate Prediction Center is forecasting for ENSO-neutral conditions through summer 2020.

The last time the Northern Hemisphere experienced ENSO-neutral conditions was in 2013 where over 70 million lbs of Dungeness was harvested from Alaska to California.

--- Regarding the recent buzz that made headlines on Ocean Acidification dissolving the Shells of Dungeness Crab and fisheries managers will confirm that the research is about shell condition of larval stages.

It is important to note that we are not seeing any affect to adult crab at this time.

Troy Buell of the Oregon Department of Fish and Wildlife advised that still there are at least two other concerning effects on the fishery - warmer waters lead to more frequent, longer duration, and intense harmful Algal Blooms that produce domoic acid. 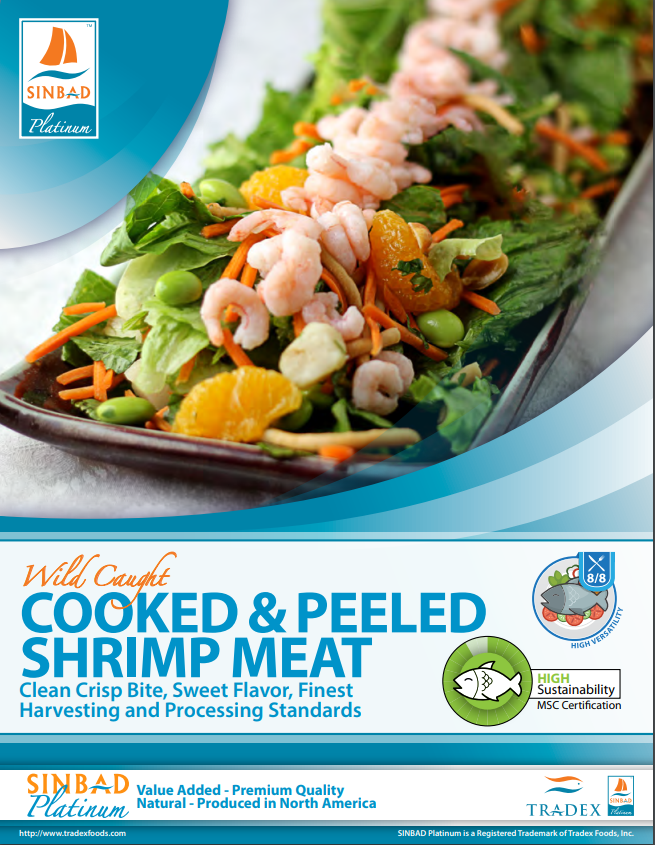 So far this year fisheries managers from Washington to California do not have concerns with domoic acid unlike last year where domoic acid resulted in delays or halts to the start of the fisheries.

State fishery mangers and scientist are also monitoring for the return of "The Blob" that had been forming in the summer but has officially fell below the threshold criteria for a marine heatwave on January 2, 2020 according to the National Oceanic and Atmospheric Administration.

This is something that they are watchful for but there is no immediate concern about another one at this time.