Sockeye Salmon flesh is rich in flavour and contains healthy Omega-3 Fatty Acids. Sockeye is reputed for its rich orange flesh that stays brilliant when cooked. Sockeye flesh is moist and firm with a delicate flake.

Sockeye Salmon range as far south as California and Japan - and as far north as the Canadian Arctic and Siberia. Sockeye are most abundant in river systems in both Alaska and British Columbia – the largest harvest in the world occurs in Bristol Bay in Southwestern Alaska.

Sockeye Salmon populations vary – some are considered healthy while others are low. In the Pacific Northwest - one of seven Sockeye populations is listed as endangered and another one as threatened under the Endangered Species Act. Almost 100% of the Sockeye purchased in the US comes from healthy stocks caught by US fisheries - primarily in Alaska. Alaskan management practices are considered highly effective and Pacific Salmon are amongst the most intensively managed fish species.

Seafood Watch
Ocean Wise
MSC Certification
Fishy Fact: The name “Sockeye” is believed to be derived from the Coast Salish name “sukkai”. Translated - this term means “fish” - and was at one time commonly used in Southwestern British Columbia. 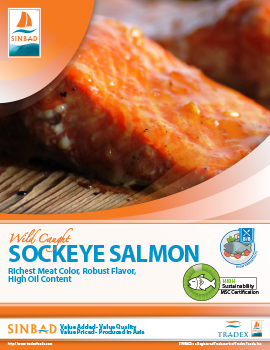 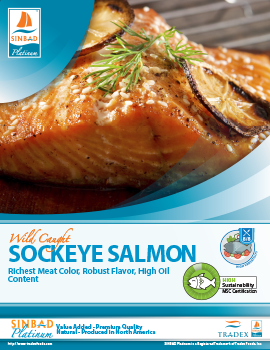