August 19, 2019 --- In this week's episode we report on whats happening with Pink Salmon. The 2019 Alaska Pink Salmon fishery is anything but predictable this odd year season from its record breaking start, to Pinks not showing up in Southeast Alaska.

--- As we pass week 32 and 33 of what historically has been the peak harvest weeks for the previous 2 odd years, it's really anyone's guess where harvest totals will end up with a few weeks of fishing left in the summer season.

Tradex Foods Salmon buyer Rob McNutt suggests that the harvest won't meet the 137.8 million Pinks forecasted by the Alaska Department of Fish and Game this year but predicts that we will be close due to the recent surge in Pinks harvested in the Southeast.

Let's go over to Rob McNutt now on how this years Pink Salmon harvest will affect market conditions. 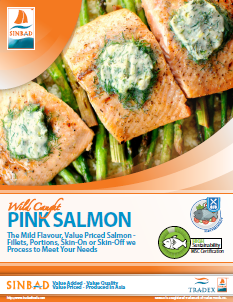 [Rob McNutt]: "The current grounds price for pinks in Alaska is 0.30/lb. There is some speculation the grounds price wil rise for fisherman , catch bonus etc. We are currently sitting at 73 million pinks landed in Alaska with a potential for 2 more weeks of decent fishing. It's anticipated the forecast will not be met. Pink prices are hovering in the low to mid $1's mark depending on quality and catch area. Average size is around 2lb+. There is a large portion on the pink catch that will be absorbed by the US governments $80 million dollar canned pink contract as well as a substantial pink salmon fillet contract. This will in-turn keep the pink salmon price stabilized. If chum salmon continues to be short, processors will look to pinks to make up for the shortage. This in-turn could make for higher pink prices."

--- --- As Alaska fails to realize ADF&G's 2019 forecast for Pinks, researchers argue that Pink Salmon are thriving and at the expense of other species.

Biological oceanographer Sonia Batten examined 15 years of data collected by container ships near the Aleutian Islands and noticed a trend where zooplankton (the basic building block in the food web), was abundant in even-number years and less abundant in odd-number years correlating this with Pink Salmon returns suggesting an overlap in diet with other species. 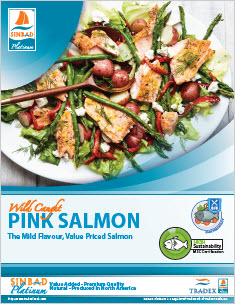 In addition to thriving wild Pink Salmon populations, some believe the 1.8 billion Hatchery Pink Salmon Fry released every year are adding to the abundance of Pinks.

However, state regulators say there is no evidence that the ocean has reached its carrying capacity for hatchery fish.

Other interesting research suggest that there is this link between Sockeye Salmon and Pink Salmon competing for food.

He noted while Sockeye returns fell, Pink Salmon were abundant, and the sockeye were almost half a kilogram smaller in those years.

A University of Washington study published in Nature Ecology & Evolution concluded that climate warming is creating favourable conditions for sockeye leaving in freshwater for Alaska's Bristol Bay, allowing them to grow faster in lakes and leave for the ocean after one year instead of two.

Taking a quote from Dr. Andrew Trites, Director of Marine Mammal Research Unit at the University of British Columbia - "It's all about how you creatively fit the data".

Looking at Alaska Salmon catch data alone for the past 10 years we can actaully see that Pink Salmon Harvest have been on the decline since 2013, and Sockeye's on the rise since the start of our data range.

As scientist and fishery managers continue their research, we look forward to their conclusions.

--- And finally, our TradexLIVE offer of the week is for our SINBAD Platinum Coho Salmon Fillets.

This is produced in our Zero Additive, Once-Frozen, Premium Quality product line produced in North America.

These are Boneless, Skin-On, Trim C, and come with a 100 precent Net Weight Guarantee.