Coho Salmon flesh has a moderate to high oil content - ranges in colour from deep orange to red - offers a medium to mild flavour and has a delicate texture.

Coho Salmon are one of six Pacific Salmon species. Pacific Salmon are anadromous fish that live in the Ocean until they reach an age of 2 -7 years - at which time they return to freshwater rivers to spawn. Once in the ocean, they tend to stay closer to the shore than other Pacific Salmon species - making them a favorite among sport fishers. As adults - Coho Salmon are metallic blue with silver on their sides and have irregular black spots. During spawning - the side of the Coho turns bright red and their back and head turn green. Coho grow to be about 8 -10 pounds.

Coho Salmon are found in coastal streams ranging from California to Alaska – their major territory lies between the Columbia River and Cook Inlet. They can also be found in the Western Pacific Ocean in coastal waters of Japan and Russia. Coho Salmon are one of the few Salmon species that remain a full year in freshwater before traveling to the sea.

Coho Salmon can be wild-caught or farmed. Wild Coho populations in the Pacific Northwest vary – some are considered healthy -however, one is endangered and three are listed as threatened. All wild Coho Salmon stocks in Alaska are healthy - Alaskan management practices are considered highly effective and Pacific Salmon are amongst the most intensively managed fish species. The majority of farmed Coho are raised in open net pens - which have considerable environmental concerns. Closed systems in the US are considered more environmentally friendly. 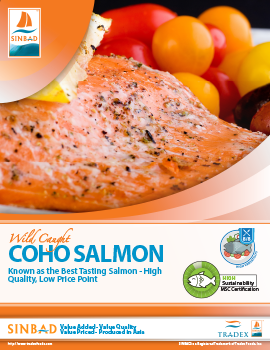 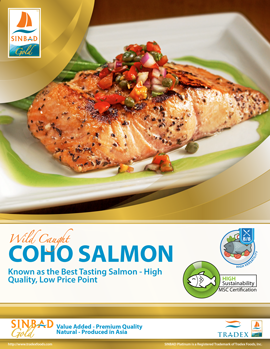 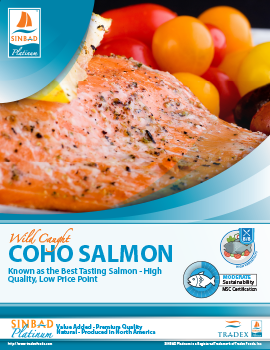